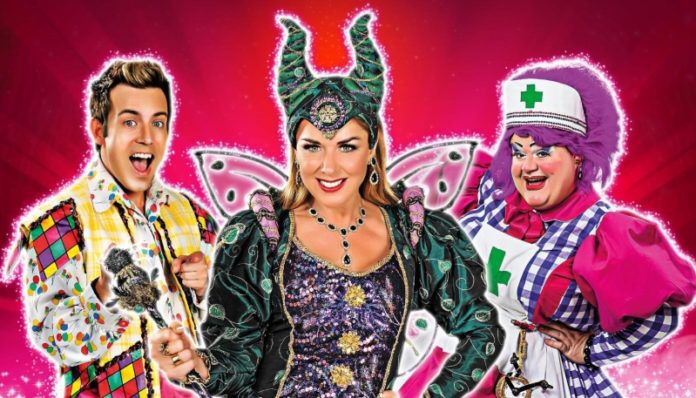 Last weekend we had the absolute pleasure of watching Sleeping Beauty at the Assembly Hall Theatre in Tunbridge Wells which is currently running for the Pantomime season. We loved Aladdin last year so this year’s show had a lot to live up to!

However, from the opening scene through to the finale we were gripped. The two hour show had us captivated, laughing out loud and smiling from ear to ear. A brilliantly engaging show for all ages.

Director John-Jackson Almond has incorporated a range of special effects allowing the stage to be brought to life. There are fireworks, dragons, a flying Superman, water squirts and even some time-travel. All were received with a range of awe and excitement by younger audience members.

Claire Sweeney relishes her role as the evil Carabosse..so much so you could hear some of the younger audience members burst into tears each time she entered the stage! Her interaction with the audience is spot on with her teasing comments about smelly children and their grandparents resulting in a chorus of enthusiastic boo’s.

Derek Moran (Milkshake TV) provides plenty of laughs as Silly Billy. Stand out scenes include a slapstick cooking debacle where he gets covered in flour, a very silly Dr Who what why gag…and a perfect mirror routine where he and Quinn Patrick leave the crowd in awe of their perfectly timed performance.

Quinn Patrick really was the star of the show for me. He is an outstanding dame (as he was last year) and definitely got the most laughs. He has a wardrobe to die for and had us all blushing with his endless innuendos and flirting…mostly aimed at an unsuspecting audience member named Larry!!

I highly recommend this show which will have the whole family from toddler to teen and even the adults enjoying every minute. I guarantee a visit to Sleeping Beauty this Christmas season will leave you feeling festive and with a belly sore from laughter.